Bringing the Community Together – Blindfolded

Bringing the Community Together – Blindfolded

On this field, the balls beep, the bases buzz and the crowd, even while on the edge of their seats, is silent.

This is Beepball, a variation on baseball that allows those who are blind or visually impaired to play, often alongside sighted players.

In many ways, Beepball looks (and sounds) very different than traditional baseball, but it’s bringing the community together with the same sense of comradery and competition.

MindsEye Radio, a United Way supported organization that connects people with vision loss to the news and entertainment they need to lead full lives, is bringing Beepball to the masses through community demonstrations, team-building exercises and two tournaments each year.

“What makes it unique is it’s open to people who are experiencing different walks of life. They’re all sharing in America’s pastime now,” said Jason Frazier, MindsEye president and CEO. “And since St. Louis is a baseball city, we want to make sure it’s a baseball city for everyone.” 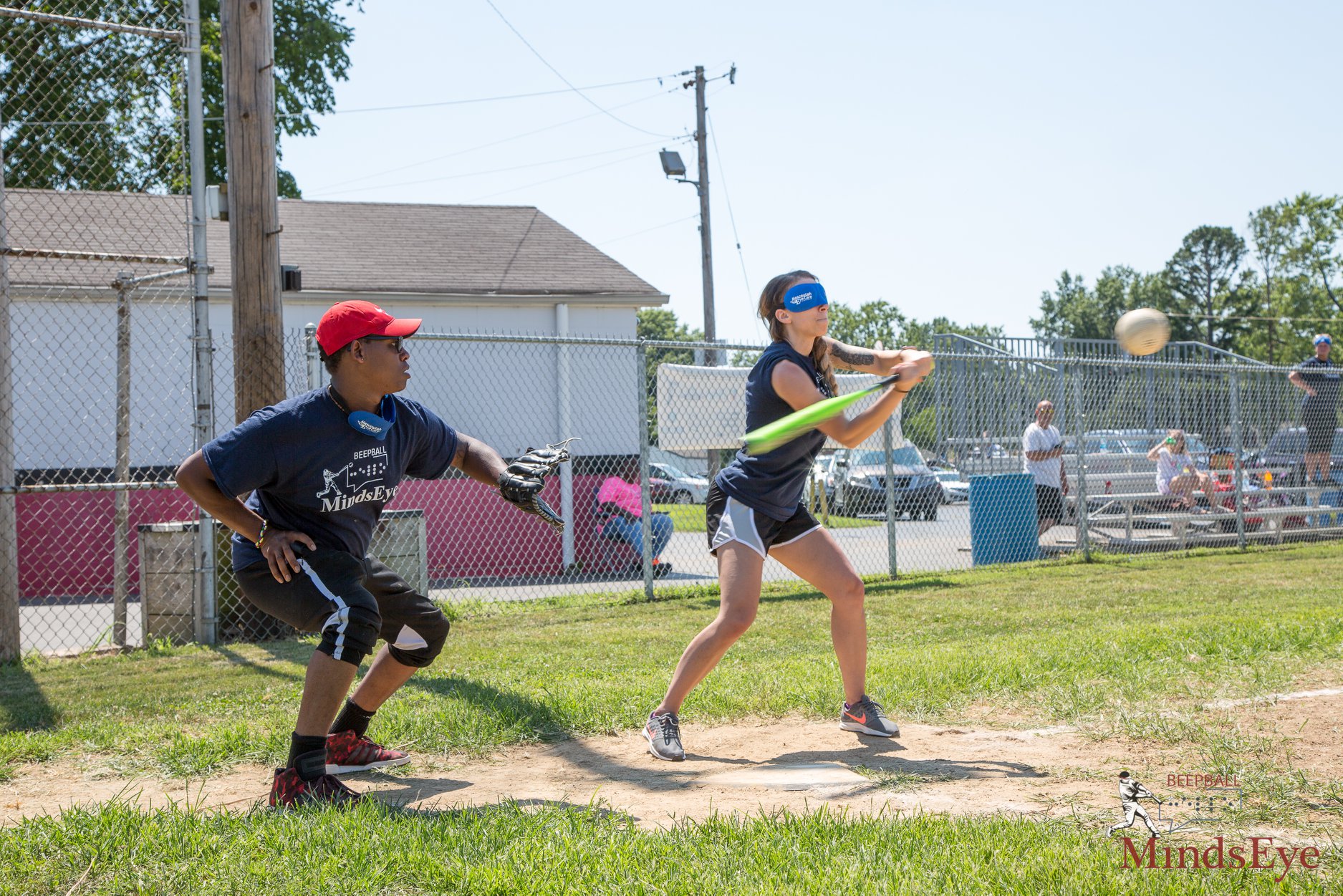 In Beepball, all players on offense and defense wear blindfolds, except for the pitcher and catcher, who are on the same team as the batter. The pitcher uses verbal cues as the ball approaches the plate so the batter knows when to swing.

There are four strikes. When a batter makes contact, they run to one of two buzzing posts located in first and third base position. Players on the field listen for the beeping ball and try to grab it before the batter reaches the base to score a run.

The only other players who are not blindfolded are two spotters on the field. They call the name of the person closest to field the ball but can’t give any directional instructions. Umpires make the calls – “strike,” “safe,” “out” and “caught” – and enforce the rules.

If that doesn’t sound challenging enough, one of the biggest rules adds another layer of difficulty: Everyone in the crowd and on the field must stay quiet so players can hear their cues.

But in the heat of the moment, that’s easier said than done, said Ryan Schmidt, a longtime Beepball player and former board chair at MindsEye. 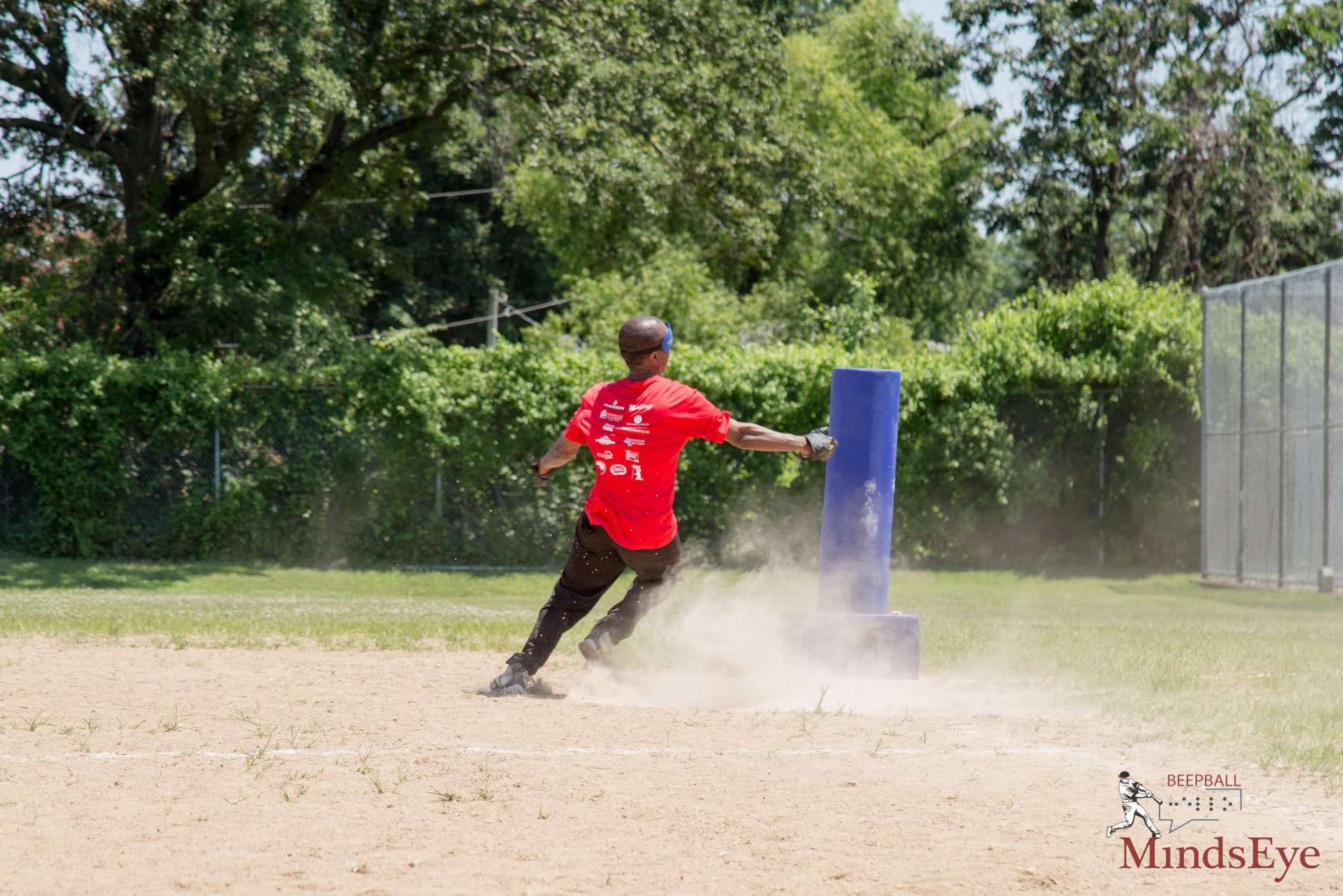 Beepball has gained a large following over the years among visually impaired and sighted players alike.

Schmidt used to miss playing sports after he began losing his vision due to Stargardt’s dystrophy. He discovered Beepball while volunteering with MindsEye, and since then, he’s become a regular player.

“For me, it’s about being ‘normal’ – going out and playing a game, being in a competition, being a teammate and having the ability to do that with everybody else,” he said. “It’s amazing because with time you start listening for the ball, you start honing in on your hearing skills. It gets you through, which is neat.”

For sighted players, the game provides a brief glimpse into what it’s like to live with vision loss. Frazier recalled the disorientation he felt the first time he played.

“It’s humbling,” he laughed. “I actually hit the ball after the second pitch, but running to the base, that’s where fear took over me, like, ‘I don’t know where I’m running!’ And then, it’s realizing that for most of our players, they can’t take their blindfold off. This is their life.”

It’s not unusual for players to not know where to run or end up tripping over each other, but that’s all part of the fun.

“People walk in and say, ‘I don’t know if I can do that.’ Then, it changes to, ‘Man, that was so much fun. We’ve got to do this again,’” Schmidt said. “You go from being very apprehensive to very excited about playing, and it’s getting over that shyness of not being able to see and really getting in there and getting dirty, because you’re rolling around in the dirt sometimes.” Sixteen local teams came together for MindsEye’s 13th annual Ultimate Beepball Tournament on July 13. Five of the teams had at least one visually impaired player, with two teams made up entirely of blind or visually impaired athletes. Most teams were sponsored by local businesses and nonprofits.

This year, Mascoutah Eye Care’s team – a group of free-agent players put together a few days prior – took home the Ultimate Beepball Champion title. The final game turned out to be one of the closest, hardest fought and longest games in the tournament’s history.

MindsEye’s tournament is just one example of the game’s increasing popularity across the country. The National Beep Baseball Association features teams from nearly every state, and even from Toronto and the Dominican Republic. The local team, the St. Louis Firing Squad, is practicing for the National Beep Baseball Association World Series, which starts on July 28. Then, they’ll compete in MindsEye’s Beepball Fall Classic in October.

As MindsEye looks ahead to its next tournament, the organization is confident the game will continue to attract new players and spectators.

“People get so interested,” Schmidt said. “People at the park stop and watch because they’re so amazed at what’s happening out on the field. What I’ve found is, over the years, it’s infectious.”