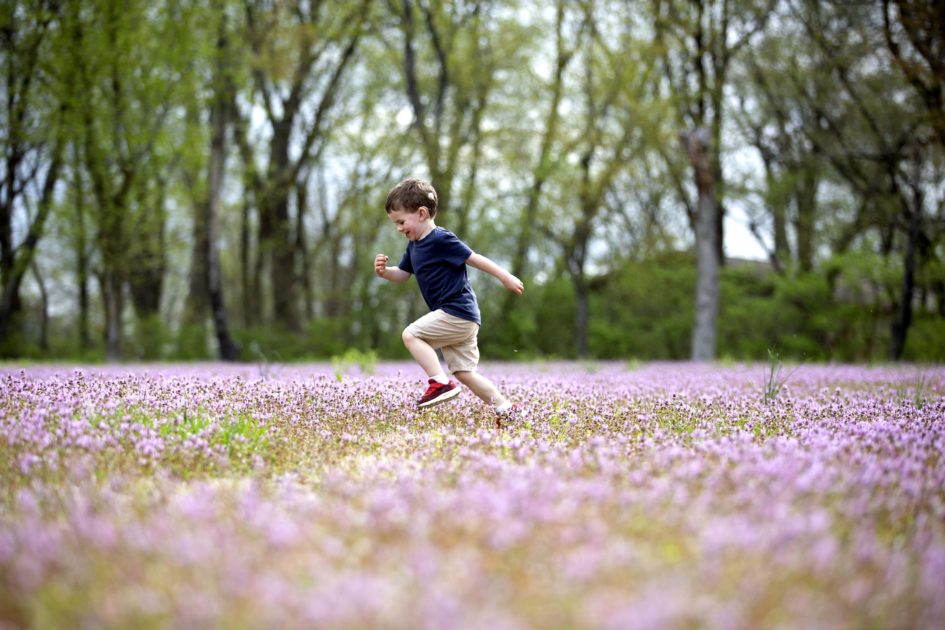 NOT MISSING A BEAT

Not Missing a Beat

Three-year-old Keegan is transfixed, concentrating on shoveling rocks into his pail in the backyard. Suddenly, he’s interrupted from his task and looks up at the sky. He points to a passing airplane.

Watching from the porch, his mom, Mitzi, grins from ear to ear.

When the plane is out of sight, Keegan goes back to playing, but Mitzi is lost in the moment. It may seem like a simple thing, but it’s something Mitzi never thought she’d see her son do.

When Keegan was born, everything seemed perfect – 10 fingers, 10 toes and eyes wide open. Mitzi and her husband Levi were thrilled their son had finally arrived.

At just a few hours old, Keegan failed his hearing test. A couple of weeks later, he failed his follow-up test. And then another and another. He was diagnosed as profoundly deaf in both ears.

Mitzi and Levi decided that cochlear implants – a set of electronic devices that bypass the damaged inner ear to deliver sound signals directly to the brain – would be the best way to set Keegan up for success.

When Keegan was a year old, he underwent his cochlear implant surgery. As Mitzi and Levi waited out the 10-hour procedure, new worries began to set in: What did the future hold for Keegan? How would they catch up on the year’s worth of language he’d missed? Would they ever hear him speak?

Mitzi and Levi were relieved to learn that the implants had allowed their son to be able to hear but knew the surgery was just the first step of their journey.

They were connected with a volunteer from United Way supported Central Institute for the Deaf (CID). She taught them what to expect as Keegan began to hear with his implants. She also taught Mitzi to help Keegan start to develop listening and language skills at home.

After Keegan’s implants were activated, a whole new world opened to him. He began experimenting with the sounds around him – slamming cabinet doors and practicing using his own voice. Whenever he encountered a sound he didn’t recognize, Mitzi took time to point out what he heard.

“Anything that made noise, he wanted to investigate,” Mitzi said. “It was a joy to show him what he’d been missing for a year and that he wanted to hear it.”

When it was time to find a preschool for Keegan, Mitzi and Levi knew that CID’s toddler class would be the perfect fit. CID focuses on teaching children who are deaf and hard of hearing to listen, talk, read and succeed by integrating language-rich educational techniques and therapies into everything they do.

While a child who is deaf may get lost in the shuffle of a large, traditional classroom setting, CID’s small class sizes ensure each student receives individualized attention and can get used to listening. Teachers trained in deaf education and audiology use play-based lessons to mimic new words and demonstrate how to form sentences.

“They have been my lifeline,” Mitzi said. “It’s not just drilling him with words and making sure they sound a certain way. They are letting Keegan learn the words at his pace, and he’s able to understand what they mean while he’s playing with the other kids.”

“Just Because He Can Hear Me”

After a year in the toddler class, Keegan has learned to use his implants – his “ears,” as he calls them – and is well on his way to being able to transition into a mainstream school.

“He’s made huge leaps and bounds,” Mitzi said. “He can communicate his feelings, his needs and what he wants. He can play, he can tell me what’s wrong, he can tell me when he’s mad. He can now put that into words. He can talk back and verbalize what he needs to verbalize, and he’s learning more and more every day.”

Today, like any other 3-year-old, Keegan enjoys anything outside: exploring, riding his bike, getting messy. His family loves water sports, and Keegan loves to be in the middle of all the action, whether they’re out on the boat or at the pool.

“He’s that kid who doesn’t want to miss a beat,” Mitzi said. “When Levi is playing his radio in the shed, Keegan can hear it, and he’s dancing or trying to sing the song – all those things I take for granted with my own ears.”

He can do it all, thanks to everything he’s learned at CID.

“It’s important for him to know that he can do things that every other little kid can do. I want him to do the best he can in life and do what he wants and not have any limitations because he’s deaf,” Mitzi said. “I just hope for him to be happy. I tell him I love him a million times a day, just because he can hear me.”

WHO ELSE WE FIGHT FOR: Maya knew she’d be in the fight of her life battling a brain tumor. On top of that, she was working full time, going to college and raising her daughter, Mila. With Mila as her motivation, Maya was determined to fight through it all. She just needed a little help.

SEE THEM PERSEVERE TOGETHER. Surviving abuse, neglect, multiple foster placements and the death of her mother, Natasha has overcome big hurdles her entire life. Determined not to be defined by her circumstances, Natasha is sprinting toward the finish line.